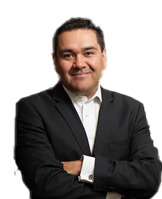 Mr. Chavez pioneered antitrust and competition law in Mexico and was one of the first attorneys to specialize in regulated industries.

Mr. Chavez frequently represents railway operators and telecommunications carriers in regulatory and antitrust proceedings. He also represents financial institutions in proceedings before banking and securities regulators and competition agencies. In addition, he advises various big pharma players in strategic transactions and represents them in securing antitrust clearance. He also works closely with our Energy team on matters involving competition issues in the electricity and hydrocarbons markets.

Mr. Chavez is a professor at the Law Department of CIDE and worked as an international attorney at Milbank’s New York office in 2006 and 2007.

He is ranked by several international publications, such as Chambers and Partners, where sources highlight his technical knowledge. The Legal500 lists him as leading individual in Competition and Antitrust, and TMT, noting his experience in advising clients from heavily regulated industries such as energy, rail and telecoms.